#48H360FP: The weekend of 2-4 June 2017, we invite all 360° filmmakers: starters and pro’s, to join the 48 Hour Amsterdam 2017 and make a 360 degree film in only 48 hour. All creativity, including scriptwriting, shooting and editing, has to happen in just that weekend. To make things even more exciting you will receive a random genre, a prop, a line and a character on Friday evening, to include in your story.

Program for the meetup:

20:00 Anneliene Van Den Boom of WeMakeVR will share experiences of her team producing and winning 48 Hour 360/VR in Nijmegen

Screenings are sponsored by The VR Cinema, drinks are paid yourself.

All VR teams will receive a special 360-starter kit containing practical stuff and discounts. Also have a look at https://48hour.360-film.org or download this infosheet.

• Be aware that the early bird subscription for this epic event ends May 8! 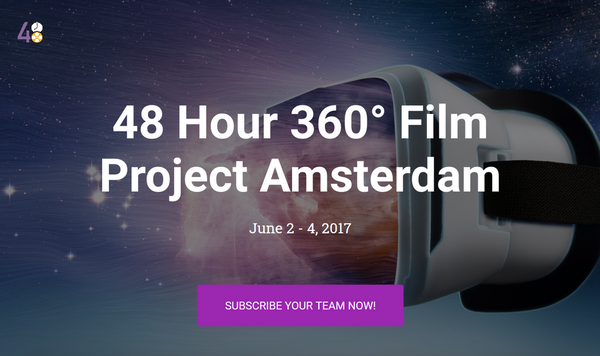 Open for all, professionals & amateurs!

You are not sure you can make a 360 degree short movie or don’t know exactly how? Your team need extra members and skills? VR specialist or just enthusiast and looking for a team?

Come and join us in the VR cinema, Friday evening May 12 and get informed, talk to others and  look for the right team to join. All kind of expertise is needed in this kind of projects, it is like a hackathon. The traditional filmmakers need VR storytellers, 360 sound engineers, etc.

If you (will have to) miss this event: have a look the 48hour360VR facebook page, see you!